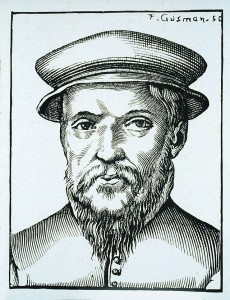 Versions of Garamond, Sabon, and Granjon: 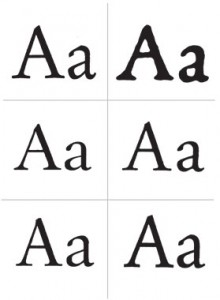 In Garamond’s own words
Introduction:
In a Dedicatory Epistle addressed to Matthieu de Longue-Joue, Bishop of Scissons, the punchcutter Claude Garamond thanked the ecclesiastic for the use of a theological work printed in his new type. Dated February 18, 1545, the dedication read:

Dedication:
“That I, an unknown and private individual, should offer and dedicate the first fruits of my work as a publisher to you, Reverend Father, with one whom I am unacquainted, may rightly be a matter of surprise to you and to anyone not fully cognizant of my purposes. I have been advised and persuaded to this course by Jean Gagny, first almoner of the Most Christian king, a man who has deserved well of the literary world by the commentaries which he has issued on sacred literature and by promoting the publications of the labours of learned and pious men. . . . Since he considered me capable of advancing the glory of the craft of printing by the art of engraving and letter-founding which I had studied from boyhood and with little profit to my personal purse, with the goodwill which he manifests to all the industrious, he advised, that I, who had been accustomed hitherto to engrave and cast types for the publishers, should enjoy my own labours and enter the publishing trade; for those, he said, who merely engrave types and go no further, are only making honey for the publishers. . . . He declared that the best way of starting would be to cut as soon as possible new types after the italic of Aldus Manutius, adding in his liberality a considerable gift in order that I might be better able to advance the work. . . . So I engraved italic types after the model of the Aldine, with what success others will judge, though certainly they have satisfied the taste of Danes, of Vatable and of others. And not content with these I applied my mind to designing minute types of the same proportion and form (men of our trade call the fount ‘glossa’). As these too seemed neat and elegant to Master Jean Gagny, he told me that he had received from you a learned and devout work of David Chambellin, formerly your father-in-law, who in earlier days had been the most distinguished of advocates and counsel in the Parlement. . . . Master Gagny thought this work worthy of being in the hands of all Christians, especially in this time of Lent. . . .

“I have heard Gagny say that your Chambellin in sacred literature has such charm and facility that he may be compared with the learned men of bygone days, and that in his writings his very soul inspired by the Holy Spirit seems to be speaking. Therefore in order that the devout and religious labours of such a man may not be lost to the men of our age and in order that those who are entirely devoted to public affairs may learn by his example not to plead without intermission but to turn to God in the inner sanctuary of the soul, Gagny handed me the work to be printed in my new types. I at once thought that these first fruits should be dedicated to you alone, the author’s son-in-law and one who boasts and thanks the gods who gave you children by the daughter of so learned and devout a man. Accept then this offering, which we have desired to go forth in your name in gratitude for the loan of the manuscript and for your generosity towards us. . . . May God be with you. Paris, A.D. 1545, 18 Feb.”

Question 1 to answer for Week 4:
What type designer work was the inspiration for the Garamond font that we all know and “love”?